A Life Dedicated to "The Most Fascinating Disease on the Planet" 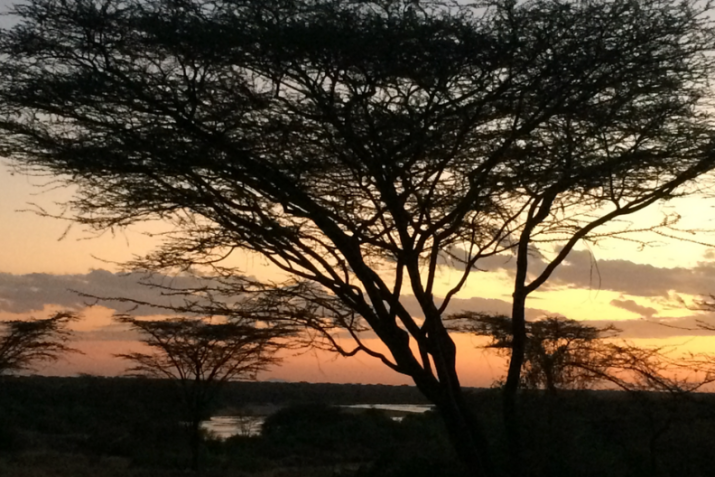 Prudhomme O'Meara's team visited Turkana, in northern Kenya, in 2019, to collaborate with colleagues at Turkana Basin Institute, where they slept under the stars and woke to this sunrise one morning. (Photo courtesy of Wendy Prudhomme O'Meara).

For more than a decade, Wendy Prudhomme O’Meara has called Kenya home. An infectious disease expert, the Duke associate professor of medicine and global health has focused much of her work on trying to better understand malaria in Kenya and on developing partnerships to improve care for those with the mosquito-borne illness.

“What brought me to East Africa was my desire to work on a really important health problem — malaria. It is hands down the most fascinating disease on the planet,” says Prudhomme O’Meara.

Malaria, caused by a parasite that infects certain mosquitos that feed on humans, is a flu-like illness that's characterized by high fevers and chills. It can be deadly and babies and children under age 5 are especially vulnerable. In Kenya, there are 3.6 million cases of malaria and 12,400 deaths a year, according to the World Health Organization’s 2019 World Malaria Report.

She has been a visiting lecturer at Moi University in Eldoret for ten years and says building bilateral relationships has been important when it comes to pursuing research and understanding malaria treatments.

“Part of what I’ve done while I’ve been here is really try to get other Duke faculty engaged and connected with the right partners and to understand what a bilateral partnership can look like and should look like. I have worked on developing a research infrastructure and a student infrastructure that meets the needs of both institutions,” she says.

“Maintaining that deep connection with our partners, that’s really important for myself and for the broader collaboration and partnership,” she adds.

Building a global health career, sharing it with others

Prudhomme-O’Meara first moved to Kenya as a postdoctoral fellow for the National Institutes of Health’s Fogarty International Center. She was working on mathematical modeling and theoretical aspects of drug resistance in malaria and planned to stay for a year. She got involved with AMPATH, a partnership between Moi and North American universities, at the same time Duke was ramping up their collaboration with Moi. Eventually, in early 2010, she joined DGHI.

Prudhomme-O’Meara says her work now has two pillars. The first is a large program centered around implementation science and how to improve patient access to and treatment with antimalarial drugs.

She and colleagues work in both the formal and informal sectors—public health facilities, as well as pharmacies run by licensed health professionals, and also informal, unlicensed “drug shops” where chemists sell over-the-counter antimalarials. In the retail sector (both registered and unlicensed locations), a test to confirm malaria is not required to buy antimalarials.

“It leads to a lot of poor targeting of antimalarial therapies—malaria drugs that have been heavily subsidized through global public health funds,” says Prudhomme O’Meara. “Only a small percentage of people treated actually have malaria. It’s being treated symptomatically, but there are lots of other illnesses that can make you feel similarly. Malaria has a very nondescript set of complications.”

She explains that if lots of people get treated with malaria drugs but don’t have the disease, the drugs may gradually become less effective—referred to as drug resistance—and this puts future patients in jeopardy.

One of her goals is to figure out how to get rapid malaria diagnostic tests—similar to the strep tests Americans can get at urgent care clinics and doctors’ offices—to be used by more people with suspected malaria cases, particularly before self-medicating with over-the-counter drugs. She and colleagues are currently conducting a cluster randomized trial in Nigeria and Kenya, testing a model targeting pharmacies and drug outlets where antimalarial medication is subsidized by the government.

“The drugs normally cost $3 or $4, but the government subsidizes them down to about a dollar. So, we want to say instead of giving these subsidized drugs to anyone, let’s target the subsidy. Anyone can get an antimalarial, but they can only get a subsidized drug if they do a malaria test and it confirms they have malaria parasites. This could encourage testing and help guide decision-making down more appropriate paths.”

A professional goal is to push malaria toward elimination. As the head of a 40-person team, Prudhomme O’Meara is passionate about opening up opportunities for those around her.

“I enjoy creating opportunities for others and building something that’s bigger than my research and interests. As usual, our students are way out ahead of us. There’s so much potential,” she says.

“We teach how to study emerging infections—things like mosquito collection and disease surveillance techniques. The materials and quizzes are online and we have weekly discussions where everyone joins in on Zoom for discussions. We’ve been able to include students from our partner universities in Kenya, Sri Lanka, China, Tanzania, and Peru,” she says.

One of the things she most enjoys about being based in Kenya is spending time with visiting faculty and students from Duke, and with other visiting partners.

“I get to be there with them as they’re having this really unique experience and see them being exposed to things they haven’t seen before. It gives me the opportunity to see it again through their eyes and being part of that is really profound,” she says.

The evolving field of global health

Over the course of her time in Kenya, Prudhomme O’Meara says she’s watched the field of global health “going through growing pains.” As a new generation of leaders emerges, they bring a fresh perspective on what a partnership should look like, she says.

“Those perceptions challenge the perceptions of the last generation of leaders. It’s been exciting to watch that happen,” she says.

The days of the vision being driven by North American priorities are coming to an end. “And that’s as it should be. But then the question becomes, how do we define and invest in a joint vision?” she says.

One thing she notes is that in Kenya, people don’t call what they’re doing “global health.”

“We talk about ‘public health collaborations’ and ‘population health.’ But we don’t really talk about global health,” she says.

Prudhomme O’Meara believes it will take experts from multiple disciplines to achieve malaria elimination. When she was in Durham this past fall, she was excited to begin thinking about how to strengthen the interaction between STEM (science, technology, engineering and math) fields and global health.

“I have a PhD in engineering and so STEM is very near and dear to my heart. There are so many exciting initiatives going on at Duke in STEM, especially in artificial intelligence or data science, and so many opportunities to use these tools to advance health equity. I’m thinking about how DGHI can foster this interface between health equity, global health and STEM. And how colleagues and students in Duke’s biomedical engineering, computer science, statistics, and AI health can collaborate—what that can look like and what are the opportunities,” she says.