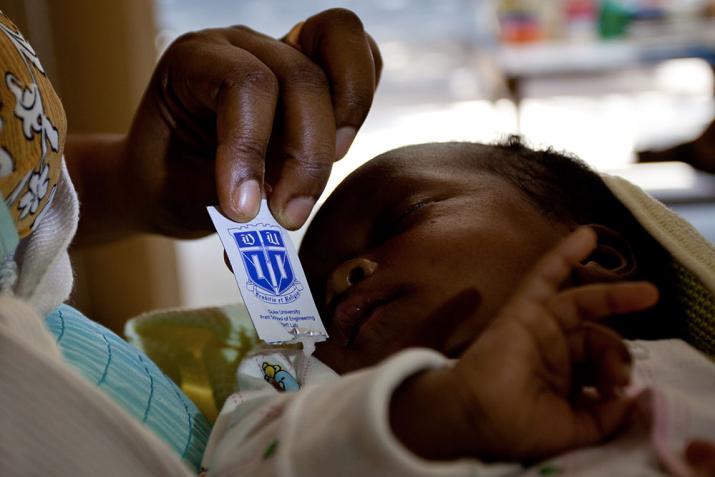 Similar to a ketchup packet, the Pratt Pouch preserves a single dose of antiretroviral medicine.

In 2008, Duke engineering professor Bob Malkin learned of a vexing failure that was frustrating efforts to prevent transmission of HIV from mothers to their newborns in many parts of the world. Antiretroviral medications—which are essential for newborns to receive in the first hours after birth to protect them from the virus during breastfeeding—were decaying in storage.

That meant trouble in places like Uganda, where most births take place at home and mothers are often given antiretrovirals for their babies at prenatal appointments months before birth. By the time the babies were born, the medications could be degraded.

Over the next few years, Malkin and his students developed the Pratt Pouch, a small foil pouch similar to a ketchup packet that preserves a single dose of antiretroviral medicine for up to a year. Tested in four countries, the pouch has enormous promise as an effective, easy-to-use and (at a production cost of four cents) inexpensive method of preventing mother-to-child transmission of HIV.

Now, the Pratt Pouch team (named after Duke’s Pratt School of Engineering) is taking steps toward broad distribution in parts of Africa. In collaboration with the Elizabeth Glaser Pediatric AIDS Foundation, they have built a high-tech facility at Hospice Uganda in Kampala with equipment that fills and seals a pouch in four seconds. Maternova, which sells obstetric and newborn technologies to a broad network of private and government clients, will distribute the pouch. The hope is to reach 40,000 infants in Uganda within three years.

“We’re very excited about the potential for this automated filling process to address critical needs in countries with a high HIV burden,” says Malkin. “Countries like Uganda, Lesotho and Botswana, where more than 30 percent of women are HIV-positive, need this larger-scale manufacturing.”