Putting Tanzania in the Driver’s Seat on Injury Research 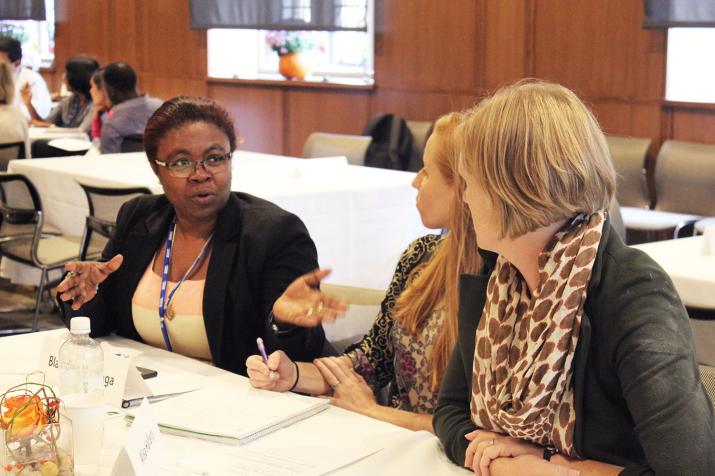 During the 10 years Catherine Staton has conducted research at the Kilimanjaro Christian Medical Centre (KCMC) in Moshi, Tanzania, Blandina Mmbaga has been many things: a mentor, a connector, a problem solver and a friend.

Soon, Mmbaga will add another role: a program director.

Mmbaga, M.D., Ph.D., a pediatrician at KCMC who serves as director of the Kilimanjaro Clinical Research Institute, has been a primary collaborator in the Duke Global Health Institute’s research and training activities in Tanzania; a relationship that goes back more than 20 years. But most of those projects were formally led by Duke professors, with Mmbaga and Tanzanian colleagues in support.

This fall, Mmbaga and Staton, M.D., an associate professor of surgery and global health, are reversing those roles. KCMC recently won a five-year grant from the National Institutes of Health’s John E. Fogarty International Center to launch a degree conferring training program for students to conduct research related to injury prevention and care. Called Trauma Research Capacity Building in Kilimanjaro, Tanzania (TRECK), the program will train 10 masters and two Ph.D. students from Tanzania to lay the groundwork for innovative research addressing the rising prevalence of injuries and injury-related disabilities in low- and middle-income countries.

Mmbaga will serve as the program director, with Staton providing clinical expertise on trauma care and research. This is only the third NIH grant awarded to KCMC as the lead institution.

“I’ve been eager to apply for this funding for the last 10 years,” Staton says. She expects the program will help develop students’ research skills and improve local understanding of a range of injury-related topics, from effective prevention strategies to trauma care to post-hospitalization outcomes and rehabilitation.

Like many fast-growing African countries, Tanzania has seen an increase in road crashes, as traffic laws and infrastructure have struggled to keep up with population growth. Drivers of two- and three-wheeled taxis in Tanzanian cities frequently don’t wear helmets, and alcohol use while driving is a growing problem, according to Staton and Mmbaga.

Few Tanzanian medical centers have specialized trauma care, and with no structured emergency transport system, injured patients often just show up at the hospital. Staton says about 60% of the deaths that occur in KCMC’s intensive care unit are because of traumatic brain injury.

“Trauma and injuries are a big problem in Tanzania,” says Mmbaga. “So many people have lost their lives. This is a good time for this project because it supports preventative measures for something we are missing.”

Staton has worked with Mmbaga and the KCMC team during the last decade to establish a registry to track and collect data about injuries. KCMC opened a formal emergency department in 2019 and has used data to improve processes for triaging and treating patients.

But given the complex factors that play into Tanzania’s injury problem, both Staton and Mmbaga say more research is desperately needed.

“If we need better roads to allow for transportation, we also need police to help with enforcement, regulations to make sure cars and motorcycles are safe, and some level of health policy before [patients] get to the hospital,” Staton says. “We need a multidisciplinary team to take care of the patients to reduce the burden of injury and their morbidity.”

Staton says it’s equally important that this research come from Tanzanian students, led by people with experience in their own health systems.

“This demonstrates capacity building really works. Blandina has done this kind of work in other areas where Duke has been the primary lead,” Staton says. “We want to help and support KCMC and Blandina as they continue to take this mantle and continue their work and growth as lead for the project.”

“No one does this work alone,” Mmbaga adds. “The biggest thing is creating a network of like-minded, injury-focused, data-driven researchers on both sides – at Duke and KCMC – that can continue to form these bonds of support, education and mentorship. And not only produce more grants, but more projects and innovations and interventions to improve health.”