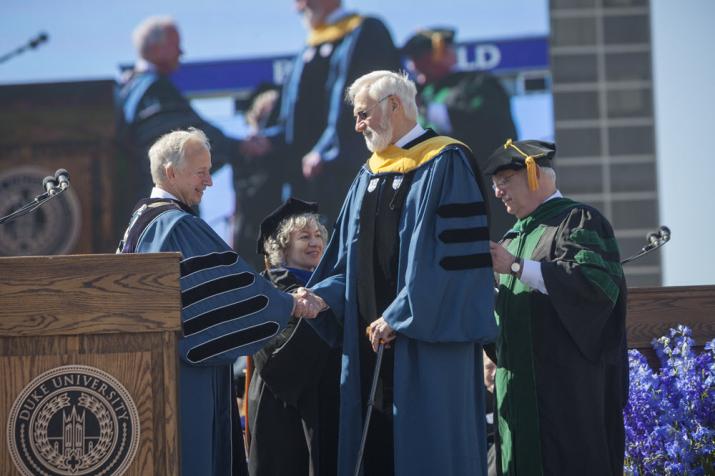 William H. (Bill) Foege, regarded by many as one of the most distinguished global health leaders of our time and called the “father of global health” by Duke President Richard Brodhead, received an honorary degree from Duke at its commencement ceremony on Sunday, May 15.

In the 1970s, while working in Eastern Nigeria, Foege devised the vaccination strategy that led to the successful campaign to eradicate smallpox. He then became chief of the Smallpox Eradication Program at the Centers for Disease Control and Prevention (CDC) and served as director of the CDC from 1977 to 1983. In 1984, he and several colleagues formed the Task Force for Child Survival, a group composed of leaders of the World Health Organization, UNICEF, The World Bank, the United Nations Development Program and the Rockefeller Foundation, which successfully accelerated childhood immunization rates globally from 20 percent to 80 percent over a five-year period.

Foege was director of The Carter Center from 1986 to 1992. In January 1997, he joined the faculty of the Rollins School of Public Health at Emory University and in September 1999 was named presidential distinguished professor of international health. At that time he became the first senior medical adviser to the Bill & Melinda Gates Foundation. He served in that capacity until last year and has had much influence on the priorities of that Foundation.

In May of this year, Foege was awarded the U.S. Presidential Medal of Freedom for his contributions to global health.

“No one alive today has had such an influence on the landscape of global health,” said DGHI director Michael Merson.

We had the opportunity to pose a few questions to Foege, and his answers follow.

DGHI: In May, more than 100 Duke University students graduated with a global health credential: as undergraduate global health majors and minors, with a master of science in global health, or as doctoral scholars. What advice to you have for students with a passion for global health who hope to make a difference in the world?

Foege: The Earl of Shaftsbury defined “good” as the focus on the needs of the group rather than on oneself. He said the larger the group the better. Concentrating on global health gives a focus to the largest existing group. Combine that with a focus on all future people to be born and you have the base philosophy for global health, social justice.

The tools continue to improve, making it possible to have great impact. Be a generalist to understand the problems to be solved, be a specialist with skills to apply to the problems, and seek truth so you know what the problems are and whether interventions are having an impact.

Foege: I would put emphasis on our interdependence. Ebola made that point. I would suggest three priority areas. Climate change is a challenge far beyond our current ability to grasp or change. Bioterrorism is a constant worry and requires the best we have in figuring out responses. The highest threat comes from terrorist groups where small numbers of people can threaten the nations collectively. Third, we need collective action on improving our public health infrastructure. From global to local. Why did WHO have trouble responding to Ebola? Not because there are incompetent people in WHO but because the U.S. and other countries tell them each year to reduce their budget. They simply don’t have the resources and people to provide global protection.

DGHI: While population health addresses the needs of large groups of people, surely there have been individuals or singular events that you have encountered in your career that have served to motivate or inspire you in your work. Could you tell us about one of them?

Foege: Watching Jim Grant lead UNICEF in a way that encouraged other organizations, country leaders, corporations and volunteers to improve child health was an inspiration to everyone in the field. It was possible to see changes every month. The other example I have used often. When the history of global health is written, it will be clear that a tipping point was seen about the year 2000 when a new level of attention provided increased interest in the field, career pathways, research options, and a move in academic institutions around the world to inspire students to sample, and sometimes be smitten by global health. It will then be clear that the tipping point was the result of two people, Melinda and Bill Gates!

DGHI: You were inspired to get into a global health by the work of an uncle who was a missionary in New Guinea. Please describe the harmony or disconnect you perceive between science and faith (or spirituality).

Foege: Another factor was the work of Albert Schweitzer a century ago in Africa. Churches provided some of the earliest impact in global health and in some fields, such as leprosy, they were the predominant force in treatment and research. Much of this interest was good but at times it strayed as churches used health as a proselytizing tool. I have always thought their work should be a result of what they believe rather than a tool in changing the belief of others.

DGHI: You have the reputation of having a great sense of humor and have been known to play a practical joke every now and then. How has humor helped you to navigate some of the most serious issues of our time?

Foege: Much of what we experience is quite grim. Plato said we should show kindness because everyone carries a heavy load. For many the load is too heavy and without respite. Being sick, malnourished, without access to the thinking of others, and with no hope for the future to be better almost demands fatalism. Fifty years ago, my wife, three-year-old son and I lived in an African village. I thought we would understand what it was like. I was wrong. We could leave, they could not. We could afford screens on our windows, vaccines and anti-malarial drugs. They could not.

Gandhi said his idea of the Golden Rule was that he could not enjoy things not enjoyed by others. Our health, wealth and opportunity have placed a burden on us to share, so that others may experience the freedom we have.