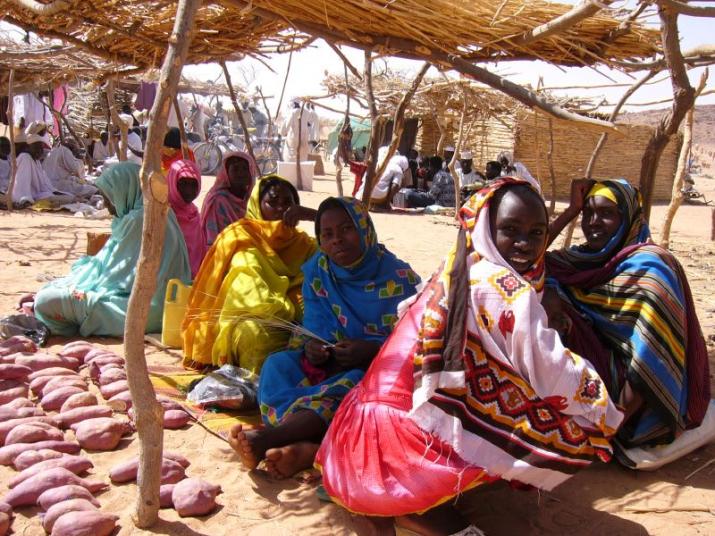 Refugee women in Chad. (NOTE: These women were not part of the study.) Photo by Mark Knobil, from Pittsburgh, USA, from Wikimedia Commons.

Growing evidence suggests that during times of war and displacement, women are at a greater risk of intimate partner violence (IPV) than in non-conflict settings. A recent study conducted across three refugee camps in three different countries revealed several key drivers for IPV: breakdowns of gender norms and roles, men’s substance use, women’s separation from their family, rapid remarriages and forced marriages.

Eve Puffer, assistant professor of psychology and neuroscience and global health, and Elsa Friis, a PhD student in clinical psychology and global health doctoral scholar, co-authored the study, along with researchers from the University of Texas at Austin and Queen Margaret University Edinburgh. Puffer worked at the IRC prior to coming to Duke and has stayed connected with the organization as an academic partner on several projects.

“This is one of the first studies to really examine women’s experience of IPV in refugee camps,” said Puffer. “This study was unique in that we took an in-depth, nuanced look at the dynamics of gender norms and help-seeking processes, and we incorporated a wide range of perspectives.”

The researchers explored how factors that differ from the in-country home setting to the refugee camp setting might provoke or exacerbate IPV. For example, Friis noted, one difference is that women’s typical sources of support in addressing IPV—family members, friends and trusted community leaders—are no longer available or are significantly diminished.

“This study reinforces the need to work within the family structure and cultural and gender norms to improve family dynamics, and to involve men in interventions designed to address IPV,” said Puffer. “It also points to the value of integrated, family-based programming across sectors. Where we see IPV, we often see other issues such as substance use and child maltreatment.”

In addition to the study published in the journal Violence Against Women, the IRC published a practice brief, “Private Violence, Public Concern.”