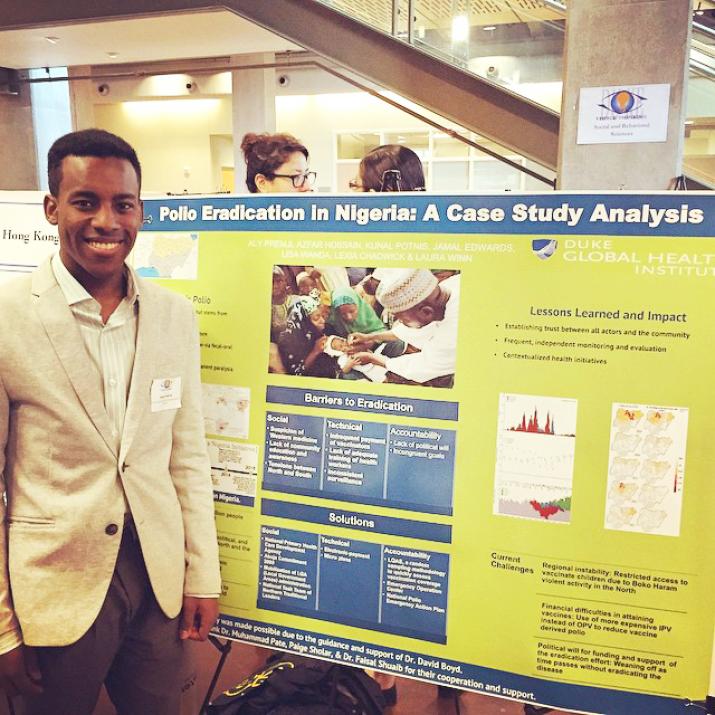 Jamal Edwards, a first-generation college student majoring in global health and journalism, entered Duke with one fellowship and will leave with another when he graduates next year.

As a high-achieving student committed to preparing for a profession in health care, Edwards was selected as a Cardea Fellow as a freshman. Not long after that, a writing class, “On the Boundaries of Medicine,” planted the seed for his interest in global health.

Since then, he’s pursued coursework at the intersection of global health and communications, such as global health professor Kearsley Stewart’s “Narratives of People Living with HIV/AIDS” class and an independent study on polio eradication with global health professor David Boyd. As a Robertson Scholar, he also takes courses at UNC Chapel Hill’s School of Journalism and Mass Communication. Edwards is particularly interested in multimedia storytelling, health policy, the experience of illness and messaging strategies to effect behavior change.

But coursework is just the beginning for Edwards; he’s already applied what he’s learned in the classroom to a number of fieldwork experiences and taken away valuable lessons.

In his freshman year, he worked on a health communication campaign focusing on nutrition with a community action group in rural eastern Kentucky, where he learned how critical community voices are to making healthcare initiatives successful.

As a sophomore, Edwards secured a summer internship at the Joint United Nations Commission on HIV/AIDS. “By working alongside the pioneers and community leaders on the frontier of the fight against HIV/AIDS,” he said, “I began to understand that while there are many barriers that separate us as countries and cultures, there are even more core principles that unite us humans.”

This spring, Edwards was named a Thomas F. Pickering Fellow by the Woodrow Wilson Foundation, which will afford him the opportunity to pursue graduate school in international/public affairs focusing on global health, complete two internships and join the Foreign Service at the U.S. Department of State.

What’s in store for Edwards long-term? “I’m looking forward to a career in diplomacy and global health,” he says. And we’d say he’s well on his way.