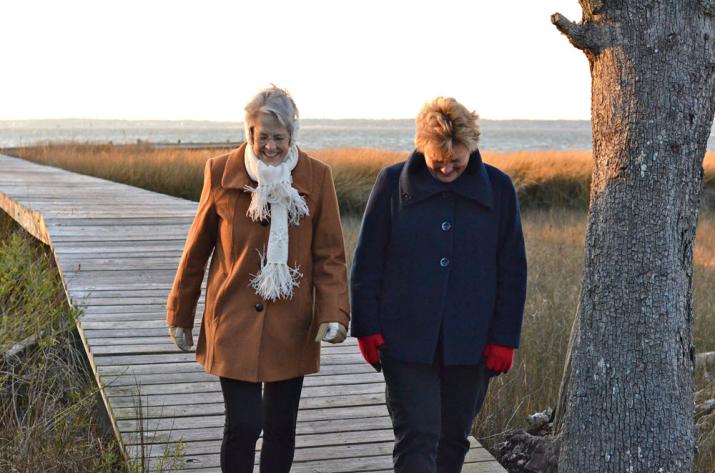 Being able to draw personal support from other clergy can be a critical factor in promoting positive mental health and preventing mental health problems. Photo by Caren Swanson.

In a recent study, associate research professor of global health Rae Jean Proeschold-Bell and her colleagues discovered that factors that decrease the likelihood of mental health problems such as depression and anxiety are not necessarily the same as those that promote positive mental health (PMH).

In the first-ever published study of PMH among clergy, the research team analyzed survey responses from 936 United Methodist clergy in North Carolina. They found that the unique factors that relate to PMH for clergy are (1) having a congregation that is positively engaged in the larger community and open to new ideas and people and (2) experiencing support from congregants as an individual and not just as a pastor.

Clergy frequently encounter and are called upon to respond to highly stressful situations as part of their professional roles. As a group, they experience high rates of depression. However, few studies have examined protective factors for clergy, such as factors that may increase their PMH. The purpose of this study was to analyze a broad range of factors that may potentially decrease mental health problems such as emotional exhaustion, depression and anxiety or, separately, improve PMH.

Positive Mental Health Is More than the Absence of Negative Emotions

Researchers use the term “positive mental health” (PMH) to refer to constructs related to the presence of a healthy mental state—those that reflect rewarding moods, such as satisfaction, paired with a sense of personal meaning in life and social engagement.. People with positive mental health tend to feel content, feel that they’re growing as an individual and feel that they belong to a group and are contributing to society.

According to Proeschold-Bell, people who have strong PMH are less likely to experience a new case of anxiety or depression, be hospitalized or develop a chronic disease in the next year. “Putting resources toward promoting positive mental health can have a preventive effect,” she said, “not just for mental illness but physical illness as well.”

She also notes that research suggests that individuals with high PMH are less likely to show bias toward their own group and can therefore work more effectively with people of different backgrounds, races and genders. They’re also generally more social, more open to new ideas and better equipped to solve problems creatively.

Interestingly, none of these factors were significantly associated with mental health problems.

While this study clearly demonstrates the value of separately identifying positive versus negative mental health factors, one of the researchers’ conclusions is that it may be advantageous to develop interventions that address the three factors related to both—that is, solutions aimed at decreasing financial strain and social isolation and increasing social support.

For example, Proeschold-Bell proposed encouraging seminary students to develop a strong social network with their seminary peers while still in school and make a commitment to support each other beyond graduation. These relationships can help provide the emotional support clergy members need into the future as they navigate the complex relationships with parishioners and church leaders.

According to Proeschold-Bell, this emotional support can be difficult to come by for clergy. “Sometimes pastors get operational support, like a congregant bringing a casserole,” she said, “but aside from their partner or spouse, they may not have someone they can confide in, especially about church concerns.”

This study, published in the Journal for the Scientific Study of Religion, was funded by a grant from the Rural Church Area of The Duke Endowment.