Gayani Tillekeratne, who leads DGHI's research partnership in Sri Lanka, describes what it's like to work amid power outages and protests. 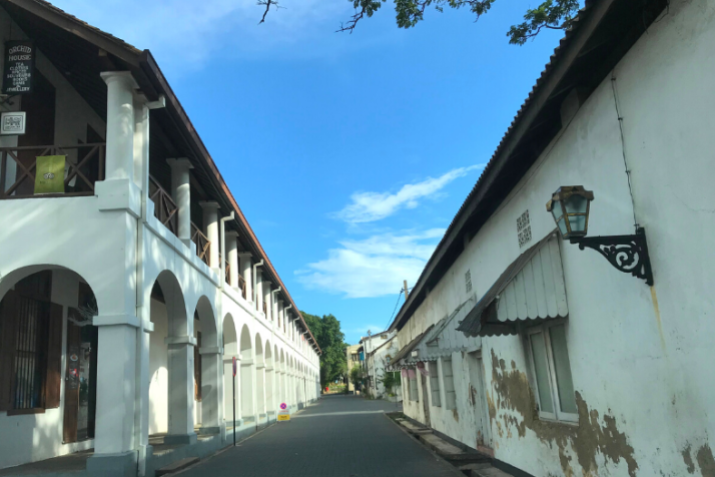 A quiet street in Galle, Sri Lanka, during a COVID-19 lockdown in spring 2020. (Photo courtesy of Champica Bodinayake)

In Sri Lanka, tensions over a deepening economic crisis boiled over during the last few days of March, as protesters flaunted government-imposed curfews to voice frustration with the government’s handling of the economy. Residents reported shortages of food and fuel, and on April 5 the United Nations Human Rights Office issued a warning about potential abuses in the government’s efforts to curtail protests.

Gayani Tillekeratne, M.D., an assistant professor of medicine and global health, watched the events unfold from the University of Ruhuna in Galle, Sri Lanka, where she co-directs the Ruhuna-Duke Centre for Infectious Diseases. A native Sri Lankan who lived in the country until she was nine, she now spends six months a year there, collaborating with clinicians and researchers at the University of Ruhuna to improve surveillance and treatment of emerging infectious diseases.

We reached out to Tillekeratne to ask about the situation in Sri Lanka and how it is affecting her and her colleagues. This email exchange took place between April 8-10 and has been edited for length and clarity.

First and foremost, are you and your colleagues safe and secure?

Thank you for checking. My colleagues and I are all safe. Most of the protests have been centered in the capital, Colombo. However, there are protests happening daily throughout the country, including in Galle where Duke’s collaborative site is based. The protests have been largely peaceful, although police have used water and tear gas to break up a few of the protests. And there have been protests throughout the world by the Sri Lankan diaspora in solidarity — in London, Melbourne and Los Angeles, to name just a few.

Can you describe what’s happening there?

Sri Lanka is facing its worst economic crisis since obtaining independence in 1948. The country has overcome many challenges including a 26-year civil war, the tsunami of 2004 (the impetus for the Duke-Ruhuna collaboration), the Easter Sunday terrorist bombings in 2019, and more recently the COVID-19 pandemic. However, many people in the country are saying that these are some of the most challenging times they have faced.

Due to a combination of excessive borrowing in past years for massive infrastructure projects, unsustainable tax cuts, corruption and the downturn in tourism since 2019, the country is facing a severe lack of foreign reserves. Sri Lanka now has nearly US$7 billion of debt payments this year, with only about US$2 billion in reserves.

The government does not have adequate finances to purchase basic commodities such as petrol, diesel and cooking gas for the public. People are standing in long lines for limited supplies. Due to a lack of diesel fuel to run power plants, there have been daily electricity cuts which have lasted up to 12 to 15 hours a day, though this has improved in recent days. Inflation has spiked and the prices of basic items such as bread, rice, and produce have also risen, causing difficulties for those who were economically disadvantaged.

Sri Lanka relies heavily on imports for food, medicines and fuel, and so there is a fear that basic goods will become unaffordable or unavailable in the future. The power cuts are having a negative effect on the economy and affecting all sectors including education, health care, public transportation and now tourism.

What do the protesters want?

Sri Lankans are protesting the rise in prices, lack of basic goods and fuel, and the power outages. They are asking for a change in government because the president, prime minister and multiple other members in high political positions are all members of the same family. There is suspicion of widespread corruption within this family that has contributed to the current economic crisis.

In addition, when the protests were first starting, the government briefly instituted a national curfew, issued emergency powers usually reserved for national threats such as terrorist acts, and shut down social media channels. The protests are also against what has been seen as an infringement on the rights of the people to protest peacefully and to speak freely. All social classes, races and religions have been affected and have taken the streets together. The resulting unity has been an unexpected and very positive outcome of the current economic crisis.

What are you and your colleagues most concerned about now?

We are mostly concerned that there does not seem to be a clear plan or solution from the government yet. Without swift and major change, the prices of basic commodities will continue to rise, which will make life very difficult for everyone. Importing basic goods will become more expensive or impossible, leading to shortages of essential items such as medications. This is already starting to be felt within the country. Power cuts will continue to negatively impact any chance of economic recovery.

Can you describe the goals of your research there?

Broadly, the goals of our infectious diseases research program in Sri Lanka are to improve the diagnosis and management of known and emerging infectious diseases. Over the last 15 years, we have conducted large surveillance programs to identify the epidemiology of acute febrile and respiratory illnesses such as dengue, leptospirosis and influenza. We are now working to develop point-of-care diagnostic tests to improve detection of these infections and to predict which patients may progress to more severe disease.

We would like to develop practical, cost-effective algorithms using readily available data and low-cost tests to improve patient care, reduce unnecessary antibiotic use and decrease unnecessary admissions/ costs to the health system. Other important goals of our program include building local capacity by developing laboratory infrastructure, training students and personnel in research skills, and liaising with the public health system to provide real-time data. Our work has recently been consolidated under a new Centre for Infectious Diseases at Ruhuna.

Researchers in a molecular diagnostics...

Has your work been affected by shortages or power outages?

Initially, when the power outages lasted for 12 or more hours, it was difficult to be highly productive as laptops and phones could not last the duration of the outages. The power cuts are now more manageable – around six hours a day, divided into two blocks. Laboratory testing for our studies has been delayed due to inability to run equipment for the entire day. Our freezers, which hold biological samples from the last decade of studies, have been strained, and we have had to frequently replace the backup carbon dioxide cylinders to cool them.

Are there wider health impacts from the crisis?

Due to the heat, the power outages have been difficult to tolerate for the very young and the very old. Routine surgeries in some hospitals have been canceled. The economic crisis is expected to result in shortages of basic medications and supplies for the public hospitals in upcoming weeks, which will have important ramifications for the overall health of the people.

Duke has such strong connections with Sri Lanka. What is your message for colleagues in the U.S. and elsewhere who are watching the news there with concern?

At the moment, it is difficult to predict how things will evolve. If the political system and economy stabilize due to a financial solution, life and work could return to relative normalcy. However, it is likely that at least the upcoming months will be challenging in the country. It will be important to continue to support our Sri Lankan colleagues, whether through donations of money or medical supplies or just moral support.