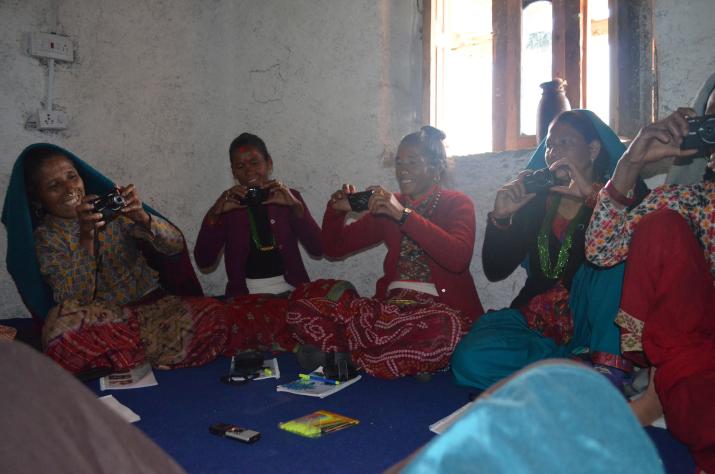 Photovoice training session #1: learning how to use the camera.

In my last blog post, entitled “The Sustainability of Global Health Research” I talked about community-based participatory research and why Photovoice is such a powerful research methodology – one that is grounded in reciprocity, community development and social action. Today, I want to share a bit more about what Photovoice is and how I have used the qualitative method in the field.

Photovoice in Nepal: exploring the impacts of a changing environment on one’s well-being

Photovoice is a participatory method, defined by its creators Wang and Burris 1997 as a ““process by which people can identify, represent and enhance their community through a specific photographic technique”(Wang and Burris 1997, p. 369).  It uses images as a tool to deconstruct problems by posing meaningful questions in a community to find actionable solutions.  For example, for my project, I have used Photovoice as a process to bring groups of women farmers together to discuss how climate change and a changing environment impacts their mental health and psychosocial well-being.  I worked with two groups of women – one upper caste, one lower caste – to compare the subjective appraisals of impact on both the natural and built environment as well as its impact on mental health and well-being.

During the Photovoice course I took at University of North Carolina (UNC) this past spring we conducted a Photovoice project. The project consisted of five (5) sessions – an introductory session, three (3) image analysis sessions, and one theme-validation session. I used this same model in the field. During session one, Renu (my RA) and I introduced Photovoice to the women, facilitated a conversation about image ethics, trained the women to use the cameras provided, set group norms, and together, developed the first problem-posing question assignment. The first question developed was: What is the impact of water scarcity on well-being and livelihood? Other topics we explored in both groups included disease, deforestation, alcoholism, crop productivity, daily stressors and drought. It’s been an incredible honor to listen to our groups share their stories – their pleasures and their deep pain regarding these issues.

Between the first and second session, group members took photographs to represent or answer the question from their point of view. For example to represent the impact of water scarcity, one woman took a picture of the dry, un-farmable land and another woman took a picture of a water tap to discuss the dispute over water rights among different castes.

During the second session, the women selected one of the images to unpack and discuss this issue in the community, as well as transition into what can be tangibly done about the problem using community resources. This is one thing I really value about this methodology – it is rooted in developing strategies for change.  Through a single image, the group was able to address issues in the community and move beyond the literal of “What do you see in this photograph?” to “What can we do to address the problem?” It has been inspiring to listen to the actionable ideas regarding the issue of water scarcity and other issues raised, as well as what community resources can be used or developed to begin to tackle these problems. Women brought up the need for more social organizing, such as a women’s group, as well as more education on environmental issues.

The component that might be the most transformative and lasting part of this process was community building. The bonds we formed while singing, story-telling, dancing, laughing, and even crying in moments, cultivated much power, strength and resilience. The women were clear about their desire from the start; the Photovoice group was a safe space for them where they could share their life stories, hardships, joys, voices, dreams and longings. Several women said it was a respite for them - from their adversity, husbands, work, anxiety and stress. They shared they felt light and joyful in our sessions and that feeling carried over to the rest of their days. They thought of this group when they were working, and before bed when they were about to sleep – this Photovoice group gave them hope.

I am absolutely touched, and it too gives me hope. But is it enough? No. And will the hope sustain? Not likely. Especially when we leave Jumla. Will just the memory of the Photovoice project be enough to mobilize change? If given training, would the women come together on their own? These are questions I specifically asked in exit interviews both immediately following the training, and two weeks after. Though they continue to share this hope, I still wonder what lasting impressions have been made and how they will manifest in the community.

One thing I am very happy about is that Renu and I were able to work with both groups of women to put on two photography exhibits in the community to highlight their voices and photographs. More than 80 community members attended the exhibit openings and many genuinely engaged with the content. By creating something tangible, we were able share the issues in a real way, much like the methodology itself.

When I go back to Jumla (as I know I will make it back at some point in the future), it will be really interesting to see if the exhibits have lived on, and more importantly if the impact of the program has been realized, even in the smallest of ways. I do believe, that something shifted for these women – in their hearts and in their minds – during our process together. I know it has for me. And for this, I have Photovoice to thank.