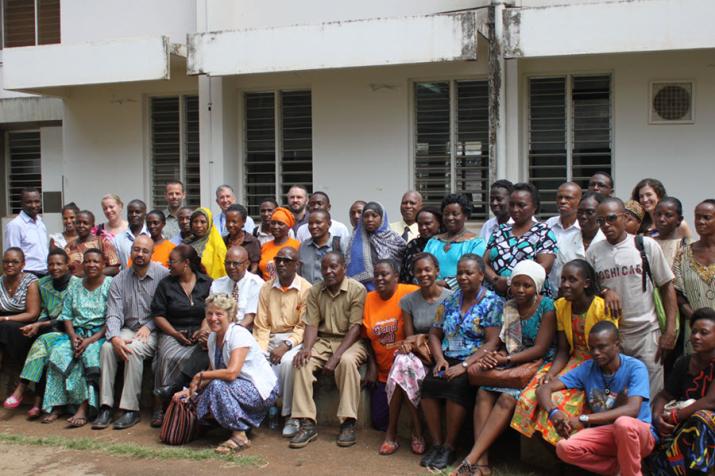 Participants and presenters at the "Illuminating Sociobehavioral Sciences Research in HIV" symposium in Moshi, Tanzania

As part of a training grant funded by the National Institutes of Health (NIH) through the Fogarty International Center, the Duke Global Health Institute (DGHI) and Kilimanjaro Christian Medical Centre (KCMC) hosted a sociobehavioral sciences symposium on March 2-3 in Moshi, Tanzania.

The first in an annual series that will span the five-year grant, the symposium covered a range of topics, from care of HIV-infected adolescents to predictors of virologic failure in Tanzania to the development of a new master’s degree program in sociobehavioral sciences at KCMC. In breakout sessions, participants explored topics such as key mental health issues in HIV-positive patients in Tanzania and specific research areas in substance and alcohol abuse in Tanzania.

The Need for More Sociobehavioral Science Experts Is Clear

Expertise in sociobehavioral sciences is in short supply in Tanzania. In fact, Moshi, a municipality of approximately 184,000 people, has had only one psychiatrist, Edward Ringo, for the last decade. As in other countries, mental health carries stigma in Tanzania; even mental health careers are stigmatized, which deters Tanzanians from studying psychiatry and related fields.

Through this NIH grant, DGHI researchers are collaborating with partners at KCMC and the University of Cape Town to help address this dire shortage. The overall goal of the grant is to develop human resource capacity in Tanzania to conduct research and provide clinical care for sociobehavioral issues in the context of HIV/AIDS—for example, addressing questions such as how social factors affect access to care or acceptance of HIV testing.

Symposium Featured a Varied Group of Presenters from DGHI, Tanzania and South Africa

The regional medical director of Moshi, Andrewleon Quaker, gave the keynote address. Among the other presenters were:

The community advisory board, a group of laypeople who work with researchers to help shape the HIV/AIDS research agenda in the area, turned out to be some of the most insightful participants because of their vast knowledge and deep understanding of HIV/AIDS issues in the community. For example, they provided some new information about intravenous drug use in the area.

Their input is already inspiring the project team to think differently about next year’s symposium. “The community advisory board blew me away,” said Charles Muiruri, project coordinator and a program director at DGHI. “Next year, we need to cast a wider net and involve the community even more. They’re going to be critical in helping us understand the sociobehavioral aspects of HIV/AIDS research and care in Tanzania.”

The training grant is led by John Bartlett and Kathleen Sikkema, director of DGHI’s global mental health initiative, in collaboration with Raimos Olomi and Blandina Mmbaga of KCMC.