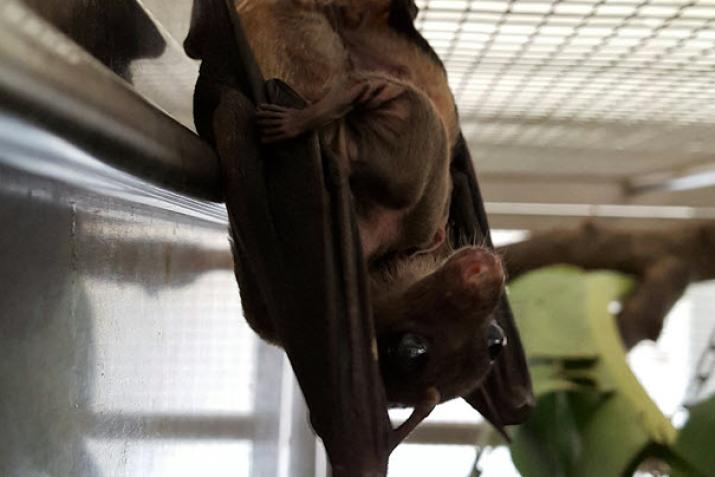 Researchers at Duke-NUS are studying the cave nectar bat (Eonycteris spelaea) to learn more about the bat’s immune system.

Linfa Wang, DGHI professor and director of the Emerging Infectious Diseases Programme at Duke-NUS Medical School, is not technically a superhero, but the One Health research that has earned him the nickname “Batman” has saved animal lives and holds great potential to do the same with humans.

For more than 20 years, Wang has been studying bat-borne viruses, exploring why bats carry so many pathogens and why many of the viruses transmitted by bats are highly lethal. And on the flip side, Wang is also investigating what some of bats’ unique characteristics—such as resistance to viral diseases and longevity of life—can teach us about improving human health.

One of Wang’s biggest accomplishments, he says, was co-leading the development of a vaccine for horses to prevent transmission of the bat-borne Hendra virus to horses.

“After many years of research, we came to the conclusion that developing a human vaccine for this virus is nearly impossible because of licensing and commercialization complexities, as well as the high cost,” said Wang. “So instead, we developed a vaccine for horses, which can ultimately minimize the spread of the virus to humans.” Viruses can be transmitted easily from horses to humans through contact with nasal secretions, saliva or waste output.

The vaccine—the first licensed vaccine against a Biosafety Level 4 agent—is currently being used in Australia.

Next Step: A Human Vaccine

Pharmaceutical companies, Wang says, have been reluctant to embrace the development of human vaccines for highly lethal emerging viruses such as Ebola, SARS or MERS that tend to come and go quickly.

However, the Coalition for Epidemic Preparedness Innovations (CEPI), a new multi-sector consortium that aims to finance and coordinate the development of new vaccines to prevent and contain infectious disease epidemics, is taking on this challenge.

“These are what we call ‘public good vaccines,’” said Wang. “They’re not profitable because they’re not in demand on an ongoing basis, but they’re critically important for saving lives during outbreaks.”

CEPI plans to raise about $10 billion over the next two decades to support the development and commercialization of human vaccines against 20 high-risk pathogens that can cause devastating outbreaks. The first round of funding—$450 million—will focus on three viruses: MERS, Lassa fever and Nipah. Wang is hopeful that Duke-NUS will be among the collaborators conducting clinical trials of vaccines for humans in Singapore through CEPI funding.

“Ten years of data from six different animal models strongly suggest that our horse vaccine can be converted into a human vaccine with sufficient funding,” said Wang.

What’s so special about bats?

For years, a debate has been raging in the emerging infectious diseases arena around the question, “Is there something unique about bats that makes them especially suitable reservoir hosts to carry viruses, some of which are highly dangerous to humans?” Wang says he has long led the “yes” camp, and his stance was recently validated in a high-profile article recently published in Nature that demonstrates that bats do, in fact, harbor a significantly higher proportion of zoonotic viruses than any other mammal.

The next debate, Wang says, is over the question of what makes bats special. He believes that the answer lies in basic bat biology and immunology, and he and his team have begun investigating these mechanisms.

Bat viruses can cause human disease, but can bats also inspire human health?

Wang thinks we have a lot to learn from bats—and that these takeaways can actually lead to powerful developments in how we approach human health.

“We often think of medicine as a study of sickness,” said Wang, “but actually, it can be helpful to reverse that approach and ask what makes animals healthy.” For example, why do bats carry so many viruses, yet rarely become sick? Why do they live so long? Why are they less prone to cancer than other mammals?

Wang suggests that because bats and humans share some physiological characteristics, a better understanding of bat immune systems could inform innovative therapeutics and gene therapy in humans. With a $10 million “Learning from Bats” grant from National Research Foundation (NRF) Singapore, he and his colleagues are exploring these connections.

One Health is an approach that recognizes that human health is connected to the health of animals and the environment. The goal of One Health is to encourage the collaborative efforts of multiple disciplines to achieve the best health for people, animals and our environment. This approach is important because six out of every 10 infectious diseases in humans are transmitted through animals.

In addition to Linfa Wang, a number of other Duke and DGHI professors are engaged in One Health research, including but not limited to: