Fighting Epilepsy in Uganda with Tools and Teamwork 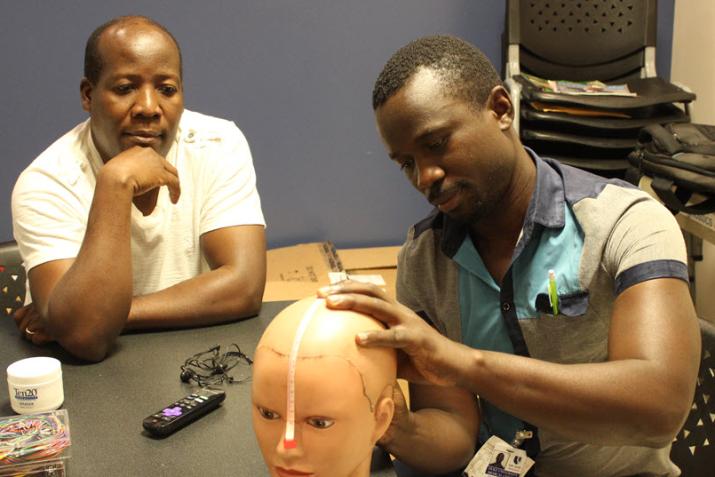 Christopher Komakech demonstrates how to place electrodes for an EEG exam.

In a windowless room on the fourth floor of Duke Hospital, Christopher Komakech lays a vinyl measuring tape across the plastic head of a mannequin. With a red marker, he draws an X near the base of the skull, then another a few inches higher along the tape.

“It’s all about precision,” he explains, studying the tape carefully. “If you miss by one inch, you may miss the area where the electrical activity is taking place.”

Komakech, a psychiatric nurse at Butabika National Referral and Teaching Mental Hospital in Kampala, Uganda, is demonstrating the international standard for placing electrodes for an electroencephalogram (EEG), the most critical exam for diagnosing neurological conditions such as epilepsy. While it’s estimated that roughly 700,000 Ugandans are living with epilepsy, very few have had an EEG, and only a handful of clinicians in the country perform the exam.

Komakech’s presence at Duke is one small step toward changing that. He and three Ugandan colleagues spent several weeks at Duke this summer, learning advanced EEG techniques and training with Duke epilepsy specialists. When they returned home, they took with them six new EEG machines, donated by the equipment maker Cadwell, which have been installed in the two hospitals that see the majority of Uganda’s epilepsy patients.

The visit and the machines are part of a cross-continental effort to help Ugandan health providers deal with the country’s growing epilepsy problem. The neurological disease is two to three times more prevalent in sub-Saharan Africa than in industrialized countries, which may be due to higher incidence of birth defects and traumatic brain injuries, as well as parasitic infections that are believed to cause the disease. But while epilepsy typically can be managed through medications or surgery, many cases in Uganda go untreated or undetected. That’s partly due to a lack of resources—Uganda has only five neurologists who are trained to deal with the disease—but also because of cultural beliefs and stigma about the disease. In parts of Uganda, epileptic seizures are often associated with psychological problems or even witchcraft, and many patients seek traditional healers, who provide herbs, rituals and spiritual healing.

“We are really only seeing a small proportion of the cases,” says Mark Kaddumukasa, a neurologist at Mulago National Referral Hospital in Uganda and part of the team that visited Duke.

In 2017, DGHI professor Michael Haglund launched a project to help Kaddumukasa and his colleagues reach more patients. The first step was to secure donation of the EEG machines, which are scarce in Uganda and often only available to patients willing to pay for exams. On one level, the Ugandan team’s visit was to work with the new machines, but Haglund sees it as the start of an international brain trust focused on the neurological disease.

“We’re linking all of the key people working on epilepsy at Duke and in Uganda,” says Haglund, who is chief of the Duke Global Neurosurgery and Neurology division (DGNN). “Our goal is to increase the capacity to treat the disease, both medically and surgically.”

Haglund plans to bring two more healthcare providers from Uganda to Duke before the end of the year, and he is setting up channels to collaborate virtually on epilepsy cases. He and Ugandan partners are also working on a model where Ugandan neurology trainees would spend time at Duke.

At the same time, Duke researchers are trying to learn more about the factors underlying Uganda’s epilepsy problem. They have launched the first countrywide survey of the prevalence of epilepsy, building off research done last summer by DGHI master’s students Nadine Sanchez MS’18 and Payal Chakraborty MS’18. That work also included analyses of epilepsy treatment and barriers to care.

One barrier the research identified lies in a disconnect between where epilepsy cases cluster and where neurological specialists work. “The specialists are located in the major cities,” says Tony Fuller MS’15, DGNN’s director of research and Uganda operations. “But we found that 75 to 80 percent of epilepsy cases are coming from outside those cities.” This may explain why the cases that do wind up with specialists are so severe: Fuller says more than 90 percent of the patients in the survey who saw specialists were experiencing 60 or more seizures a month and regularly losing consciousness during seizures.

The countrywide study may offer insights on how to better deploy specialists, Fuller notes. But the team is also working to educate healthcare providers at smaller clinics to help them spot and treat epilepsy in a community level.

“At these lower-level facilities, they often have all the necessary medications to manage epilepsy,” says Fuller. “They aren’t giving them to patients because they don’t know that they need to, and patients aren’t demanding the medications.” He says Ugandan collaborators have already started education efforts in one region, which they hope to expand nationally.

The partnership builds on more than a decade of Haglund’s work in Uganda, which has resulted in the construction of neurosurgery units at Mulago, Mengo and Mbarara hospitals and launched the country’s first neurosurgery residency program. During that time, the number of neurosurgeons in Uganda has grown from five to 12, and the goal is to reach 50 by 2030.

Kaddumukasa expects similar results from the new focus on epilepsy.

“I anticipate that this will be a long-term collaboration that will benefit research and mentoring on both sides,” he says. “We will grow together.”