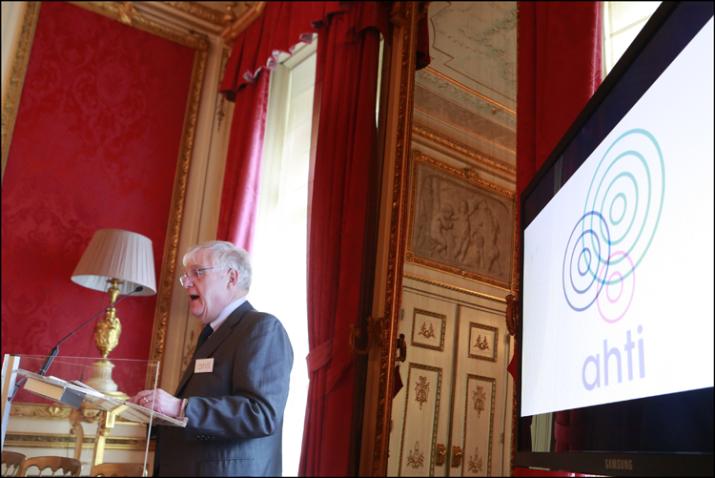 Last week, Michael Merson, director of DGHI, joined Amsterdam city officials, representatives from Dutch universities and other organizations working in global health, and corporate partners in celebrating the official launch of the Amsterdam Health & Technology Institute (AHTI). Merson was one of four featured speakers at the signing ceremony, which included a formal introduction by the vice-mayor and was covered in the Dutch media.

“Amsterdam is the center of a global network of cities that will serve as ‘living labs’ as part of this collaboration” said Merson. “The exchange of health sector knowledge and experience between Amsterdam, and other global hubs like Shanghai and Nairobi will lead to greater innovation in the health sector globally. It is also a pivotal concept for cities themselves, and Amsterdam will lead the way.”

AHTI was founded in response to a call from the City of Amsterdam for local universities and prominent Dutch corporations to come together with a common goal of improving the health of the city. The decentralization of healthcare in the Netherlands identifies the challenges faced by the population which are primarily created from people living longer and the costs of medical care increasing. The creation of AHTI will have a specific focus on technology to create sustainable and innovative solutions to these challenges.

A key requirement of this competitive proposal process was that a non-Dutch university be included in the initiative. The Duke Global Health Institute was invited to join in this collaboration by Joep Lange, the scientific director of the Amsterdam Institute of Global Health and Development, and a close colleague of Merson as the Joint Program Coordinator.  Lange tragically died a as a passenger about the Malaysian Airlines flight that was shot down earlier this year over Ukraine.

AHTI is a 10-year initiative, and the City of Amsterdam has guaranteed 7 million euros for the first three years of work with additional funding available for the duration of the contract.  Joining Merson, who serves as senior science advisor, is Randy Kramer, John Bartlett, Krishna Udayakumar, Jesko von Windheim, and Ann Lore.

Plans are underway to develop an innovative system of communication, research, and general scientific dialogue that will allow DGHI faculty and others to rapidly develop, test and transfer health care and prevention innovations globally, with particular attention to the transfer of learning between urban and non-urban settings in both developed and low and middle income countries.