Duke faculty have been partnering with colleagues in Sri Lanka since 2005, but their research collaboration recently entered new territory: outbreak response. 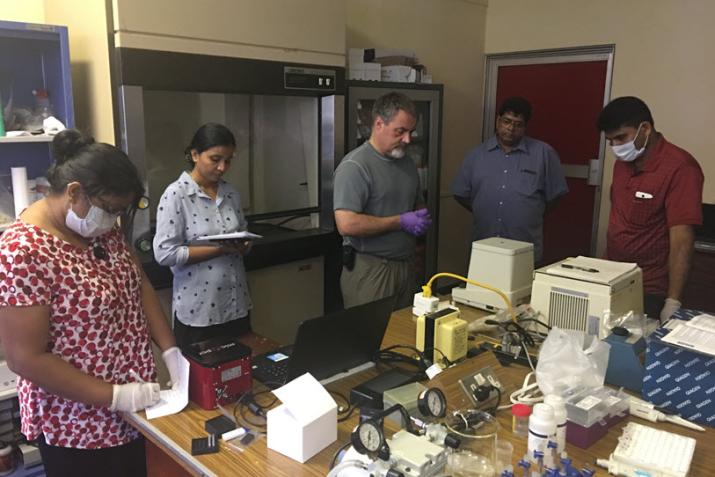 In late April, the Teaching Hospital Karapitiya (THK)—the hospital affiliated with the University of Ruhuna (UoR) in Galle—experienced a spike in admissions of children with serious, and in some cases fatal, respiratory illnesses. Most of the children, many younger than two years old, were admitted with viral pneumonia thought to be due to influenza infection.

Influenza outbreaks are not uncommon at that time of year in Sri Lanka. What distinguished this outbreak was the high proportion of deaths from the virus—over half—among previously healthy children. Further testing revealed the presence of adenovirus in more than half of the fatal cases, as well as influenza in other cases.

As the patient load continued to escalate with referrals from across the southern region of the country, the need for more hands on deck to identify and diagnose these infections at THK quickly became apparent.

Faculty members and trainees in the Duke-Ruhuna collaboration—including several from the Hubert-Yeargan Center for Global Health at the Duke Global Health Institute—were well-positioned to assist THK clinicians, having jointly conducted numerous infectious disease studies since 2007.

It wasn’t long before THK pediatricians requested support from the Duke-Ruhuna collaborators in carrying out surveillance activities. “With a well-established research structure and resources on the ground for our current study, we were able to allocate personnel toward the outbreak response,” Tillekeratne said. “But the relationships we’ve built over time have also been instrumental to the success of this effort.”

With Tillekeratne now back on campus in Durham, Vanderburg has been facilitating Duke’s involvement in the outbreak response with help from Master of Science in Global Health student Jacob Christy. In consultation with Duke and UoR faculty members and THK staff, Vanderburg has been directing active surveillance and sample processing, overseeing the molecular diagnostics and building a secure case database. THK and Ministry of Health officials will be able to use this data to prevent and respond to future outbreaks, Vanderburg says.

Initially, one of the biggest challenges in addressing the viral outbreak was the absence of a molecular diagnostics laboratory in Galle. Samples were being sent to the Medical Research Institute, the national referral laboratory about 80 miles up the coast in Colombo. The distance to the lab and the overwhelming influx of samples led to a longer-than-ideal wait for results, in turn deferring patient treatment.

But building lab capacity at UoR’s Department of Microbiology has been a goal of the Duke-Ruhuna collaboration for years, and the outbreak catalyzed some additional investment. Within a couple weeks of the outbreak being identified, Brad Nicholson, director of the Molecular Epidemiology Research Laboratory at the Durham VA Medical Center, made an urgent trip to Sri Lanka to bring a portable, real-time polymerase chain reaction (PCR) machine to UoR, along with sufficient reagents, to enable local diagnostic testing. The PCR machine detects the specific DNA or RNA of one or more viruses in a specimen to determine its identity.

With protocols provided by DGHI professor Gregory Gray’s respiratory viral team, Nicholson set up the machine to test for adenovirus, influenza A and respiratory syncytial virus (RSV). These viruses were selected because they’re generally the most common in children and can cause severe disease resulting in hospitalization. Based on the testing, all three of these viruses are circulating, but adenovirus and influenza A have been the primary culprits in severe cases.

“The real-time PCR surveillance helped settle the dilemma of what the epidemic was about and confirmed the findings of the national surveillance data,” said Champica Bodinayake, senior lecturer in the Department of Medicine at UoR. “The PCR machine will also be immensely helpful in future collaborative research and outbreak surveillance.”

As members of the response team reflect on their collaborative effort to contain this public health crisis, they’re saddened by the lives lost while also recognizing a few positive outcomes.

“Witnessing this outbreak has been heartbreaking,” Vanderburg noted. “But this challenge has also clarified and deepened my commitment to this area of research and clinical practice by taking a two-pronged approach: first, addressing important unanswered questions about the management of viral infections and acute lung injury, and second, building capacity to manage severe respiratory illness in resource-limited settings.”

Ajith Nagahawatte, professor of microbiology at UoR, says that increased laboratory capacity at UoR’s Department of Microbiology has attracted attention from clinicians across the Southern Province seeking lab services for adenovirus, influenza, RSV and other pathogens. “The response to the outbreak has been a real team effort,” he added. “Thanks to all those who helped, the mission was a success, and it gave a lot of credibility to the University of Ruhuna-Duke University collaboration.”

And Tillekeratne has long hoped that, should an outbreak occur, she and her team would be able to assist with the response. “This is the first time we’ve actually been able to help the clinicians directly,” she said. “For me, being able to provide that service has been really rewarding.”

The DGHI team would also like to acknowledge UoR faculty members Gaya Wijayaratne and Lakmal Fonseka, who were visiting Duke at the time and provided real-time input on the outbreak response logistics.