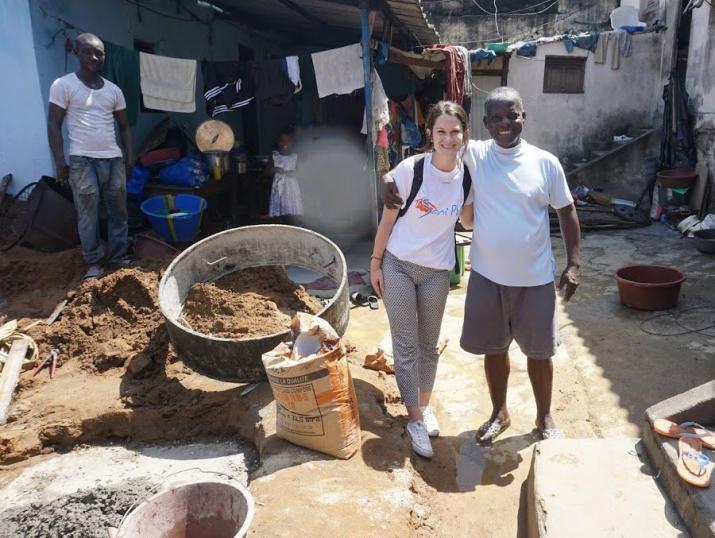 Savage smiles with the future owner of a pit latrine in a commune of Abidjan, Côte d'Ivoire while on a field visit for a sanitation project implemented by Population Services International.

Exploring the Wide World of Global Health at Duke

Savage has always been interested in the field of health and even considered attending medical school, until she participated in Duke Engage the summer after her sophomore year. She traveled to Léogâne, Haiti, with a team of students to volunteer with Family Health Ministries, studying the effects of the 2010 earthquake on mental health in the community at the earthquake’s epicenter.

“We quickly discovered this would be a challenging task, as mental illness isn’t really a recognized concept in Haiti,” Savage said. “There isn’t a word for ‘trauma’ in Haitian Creole.” The team focused their work on discovering how they could introduce and study the ideas of mental illness and trauma with their community partners.

That project piqued Savage’s interest in the field of global health. “It was my first time navigating real cultural differences, and I found it fascinating,” said Savage. She returned from Haiti with a desire to broaden her view to explore how language, culture, research methods, ethics and policy principles all contribute to communities’ health outcomes.

With the lessons she learned in Global Health 101 during her first year at Duke still fresh in her mind, Savage decided to pursue the global health major. Her highlights of the major included assistant professor Sumi Ariely’s research methods class and professor Dennis Clements’s global health capstone course, along with professor David Toole’s course on global health systems and policies.

Savage’s first post-Duke job was a communications consulting role at Global Health Strategies in New York. “The communication skills and background knowledge of global health concepts that I learned at DGHI served me well in that position,” she said.

Savage then took a position at the United Nations Foundation in Washington, DC, where she worked closely with the UN and spent six months working at the World Health Organization in Geneva. There, she developed her interest in the impact of policy, advocacy and diplomacy on the health of populations, specifically exploring the relationship between major multilaterals such as WHO and key partners such as donor governments and civil society.

Seeking to develop country-level technical expertise, Savage applied and received an offer for the year-long Princeton in Africa Fellowship. Now based in Dakar, she serves as the Regional Evidence Fellow for Population Services International (PSI) on a team that serves ten countries in West and Central Africa, including Senegal. PSI is a global non-profit that uses an innovative, market-based approach to improve health in the areas of malaria, family planning, HIV/AIDS and sanitation.

In this role, Savage provides direct support to the PSI country staff across the region, advising on data analysis, research study development and program evaluation for activities including latrine sales, contraceptive product distribution and mobile health clinics. Her main objective is to make sure PSI collects, manages and presents its data effectively and accurately. On a day-to-day basis, she provides support on the technologies used for data collection and analysis, helps develop donor reports and communications materials to showcase activities across West and Central Africa, and participates in missions and field visits to countries in the region to witness PSI’s projects in action.

At PSI, Savage regularly uses skills she developed on her Duke Engage trip and in her global health classes. “PSI uses creative techniques like human-centered design and behavior change communication—such as engaging religious leaders, hosting vocational skill-building workshops and utilizing local entertainment platforms—to talk about things like family planning, HIV self-testing and other important health behaviors that aren’t necessarily practiced in all communities,” she said. “My time at DGHI introduced me to the importance of cultural competency and understanding local values as I figure out how to communicate these ideas.”

Savage sees the field of global health as a way to unite countries or communities that don’t normally work together. “Global health is a bipartisan area that most governments and political parties can get behind,” she said. “It’s amazing to see the progress that can be achieved when countries come together to improve the lives of their most vulnerable and marginalized populations.”

After she completes her fellowship, Savage plans to pursue a combined Masters in Public Health and Masters in Business Administration before taking her lessons from the field back into a role focused on policy and advocacy.