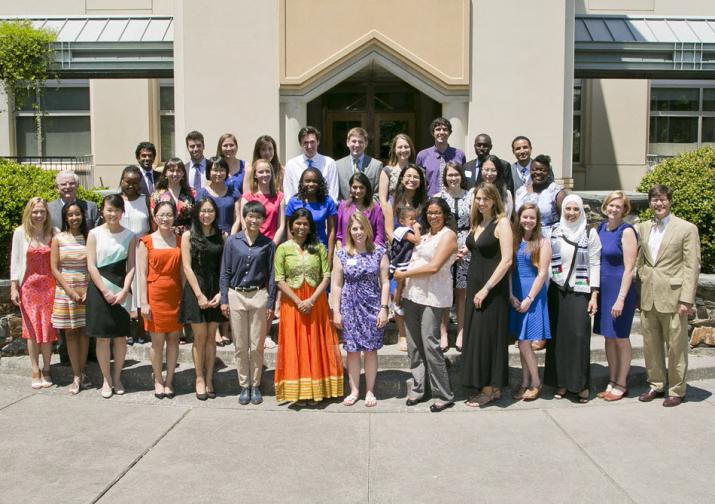 Last Friday, May 8, faculty and staff of the Duke Global Health Institute (DGHI) and 38 graduates of the Duke Master of Science in Global Health (MSc-GH) celebrated commencement in a ceremony at the Blue Express Café on campus.

In his opening remarks, Michael Merson, director of DGHI, urged the graduates to follow their passion and praised them for their accomplishments: “You are at the forefront of an amazing and exciting field of study and work, poised to make a meaningful impact. I know that our world’s future is brighter because you, tomorrow’s leaders in global health, started here at Duke.”

Christopher Woods, director of the Master of Science in Global Health program, noted that this year’s 38 graduates conducted research in 19 different countries. He encouraged the students to keep in mind that although working in global health can be “unspeakably difficult” at times, it is also incredibly rewarding and can bring about positive change. “Go forth. Be a doer,” he told them. “Inspire others along the way and take inspiration from each other’s successes.”

Tony Fuller, selected by faculty as the student commencement speaker, focused much of his talk on his fellow MSc-GH graduates. “This experience has been truly transforming,” he said, “and it’s the quality of my classmates that have made it amazing.” He went on to say that when he began the program, he was struck by the diverse ways in which his classmates were approaching global health, which ultimately helped shape and expand his own thinking about his work.

Larry Park, global health professor, research scientist and infection control epidemiologist, won the Professor of the Year award. This award is given to a faculty member who generates student enthusiasm for global health and displays sincere commitment to student learning and intellectual development, as demonstrated through openness and responsiveness to intellectual inquiry beyond the classroom.

Park was nominated by six MSc-GH students. In one of the nomination letters, graduate Seth Zissette praised Park for “epitomizing what it means to be a graduate global health professor.” Zissette reflected, “Larry Park deeply cares about the well-being and success of every student with whom he interacts. I have never seen such a genuine interest in nearly all facets of global health from a professor; it is a contagious enthusiasm that spreads to all of his students.”

In addition to being selected as the student commencement speaker, Tony Fuller was honored with the Outstanding Student Award, which is given to a student who has excelled in the classroom, in the field and as a community builder at Duke.

Michael Haglund, Fuller’s mentor and professor of surgery, neurobiology and global health, nominated Fuller for the award. He wrote, “The definition of a team player is to sacrifice time and talents for others to make the whole better. Tony has done that and more … I’m astounded with all he has accomplished and with the utmost dedication to the university, the Institute and his fellow students and family.”

The global health commencement ceremonies were among the first celebrations of Duke’s graduation weekend. At the university-wide commencement on Sunday, the address was delivered by Duke alumnus and global health leader Paul Farmer, who founded the international nonprofit organization Partners in Health and sits on the DGHI Board of Advisors.

Read more about and see pictures of the 2015 DGHI commencement celebrations.