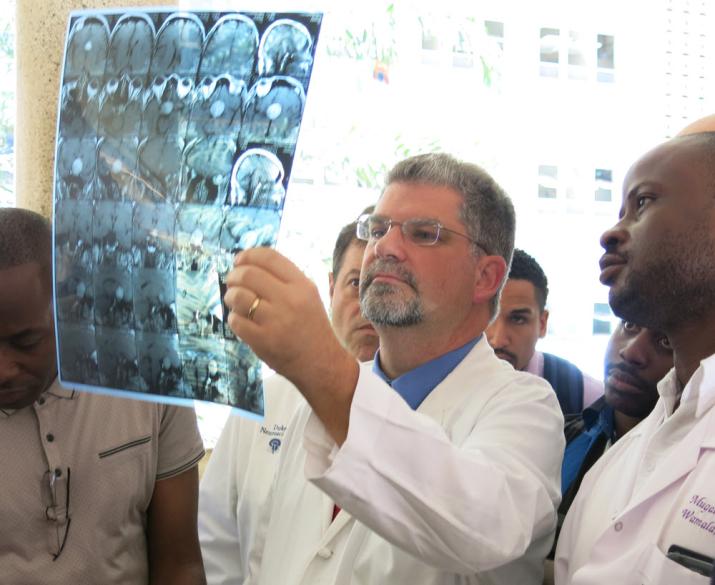 Michael Haglund reviews scans of brain surgery candidates with his team at Mulago Hospital in Kampala, Uganda, during a recent trip

The Consortium of Universities for Global Health (CUGH) recognized him with its Drs. Anvar and Pari Velji Global Health Education Award in late March.

In May, the American Association of Neurological Surgeons recognized Haglund with its 2015 Humanitarian Award. Haglund is the first neurosurgeon in North Carolina to receive this award. Although this award represents a lifetime achievement recognition of sorts, the 56-year-old shows no sign of slowing down or letting up on his commitment to global health.

New Division of Global Neurosurgery and Neuroscience in the Works

This decades-long path will culminate July 1 when a Division of Global Neurosurgery and Neuroscience (DGNN) is established within the Department of Surgery at Duke through a commitment from his division chief, John Sampson. The DGNN division, the first of its kind in the country, will include Haglund and more than twenty team members, including Christine Muhumuza, a Kampala-based project manager.

Haglund also serves as the volunteer coordinator of the Foundation for International Education for Neurological Surgery (FIENS), which sends teams of physicians and others to work on a short-term basis in underserved settings. Recognizing the need to serve in this capacity, but also train a new generation of neurosurgeons, Haglund and colleagues at FIENS developed a neurosurgery curriculum that is now being used in four east African countries. To date, though, Duke’s residency training program is the only one of its kind being implemented in Africa by an American university.

Haglund and Ugandan neurosurgeon Michael Muhumuza serve as co-directors of the East African Neurosurgery Training Program, one of Sub-Saharan Africa’s only neurosurgery residency programs, housed at Mulago National Referral and Teaching Hospital (one of DGHI's priority partners). The current group of trainees will increase the number of neurosurgeons in Uganda from five to ten.

Last December, Alex Muhindo was the first Ugandan neurosurgery resident to graduate from this five-year program and pass the qualifying exams. Fellow Ugandan Juliet Sekabunga Nalwanga is not far behind; when she completes her residency, she will become Uganda’s first female neurosurgeon.

Expanding the Program beyond Mulago

Haglund and colleagues are looking to expand the residency partnership to Mbarara University of Science and Technology, located in a district center four hours west of Kampala.

And from there, Haglund will broaden the program beyond Uganda’s borders—in Eldoret, Kenya, which has state-of-the-art neurosurgery facilities, and Kilimanjaro Christian Medical Center (KCMC) in Moshi, Tanzania.

By studying these four sites—Mulago, Mbarara, Eldoret, and KCMC—Haglund and his team can look at outcomes and treatment patterns, and potentially expand into less invasive methods of treating brain injury, building on the research of other Duke physicians and researchers.