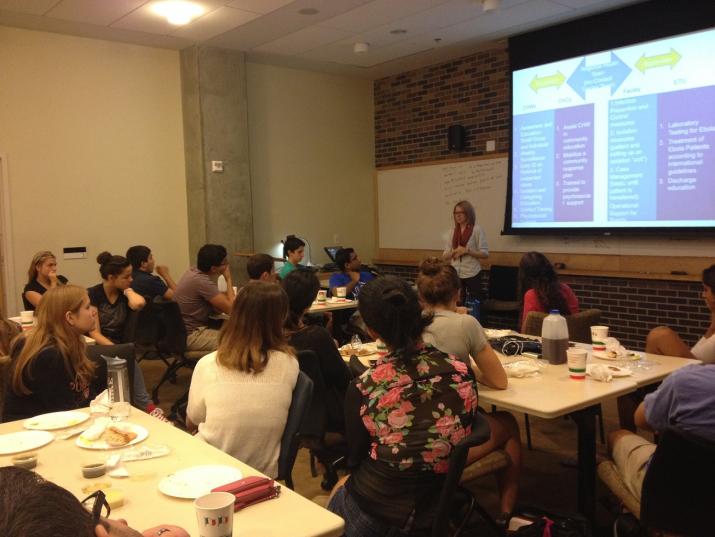 The Duke Global Health Institute has launched an Ebola Resources Page for the Duke community and others who want to stay updated on the current outbreak.

A couple months ago, people may not have heard of Ebola. But today, news of the largest Ebola outbreak in history is leading newscasts, flooding social media and becoming a popular topic of discussion and analysis on college campuses. Last week, Duke sponsored a highly-attended lecture series on the outbreak, including the global community’s response and ethical implications of untested vaccine use. Throughout the rest of this semester, a group of DGHI professors are integrating the evolving Ebola crisis into their global health classes.

In Charles Nunn’s Human Health in Evolutionary Perspective class, the current Ebola outbreak is a backdrop for teaching students about the importance of coordination and interdisciplinary action, the role of ecology and evolution in a disease outbreak, and how pathogens spillover to new hosts including humans.

Nunn made the case for how this outbreak demonstrates the need for multisectoral collaboration for making policy decisions, and that an effective response requires leadership from the fields of anthropology, psychology, medicine and research, engineering and more.  He’s also challenging students to think about how transmission events are potentially leading to more or less harmful strains of Ebola. He’s even introduced “evolutionary trees” into the discussion.

“We are talking about how these trees can address critically important interesting questions, such as: How many spillover events occurred in this outbreak?  When did the spillover occur?  How is the virus evolving? All these are vitally important questions and we need answers,” said Nunn. “Sequence data, coupled with sophisticated evolutionary analysis, can provide these answers.”

Some DGHI faculty members are making Ebola a significant portion of their class. In the Africa, Development and Emerging Diseases class, Sherryl Broverman is teaching students that Ebola illustrates many of the challenges often talked about in global health. This includes the need for a more robust One Health approach to reduce pathogen spillovers from animals to humans; the role of ecological and land use change in outbreaks; and the need for trust in functioning health systems to provide care and reduce the impact of outbreaks.

In addition to lectures, Broverman is incorporating group activities and guest speakers. Students worked together to research land use changes in Liberia that could have precipitated a zoonotic outbreak. A Duke alumna also recently visited Broverman's class to discuss the health system challenges in Liberia and her experiences on the ground. Kirby Erlandson, a global health certificate alumna, is returning to Liberia to help develop community health worker Ebola intervention units with Partners in Health.

“Education is about preparing young people to engage with the world,” said Broverman. “Connecting coursework with real world, messy, complex problems deepens student interest in the material and stimulates them to work at higher levels.”

Broverman manages a highly-active Facebook Ebola Discussion Group,  which analyzes news coverage, ethical issues and new scientific findings. The grloup is open to students and anyone else who has a Duke affiliation.

In the Fundamentals of Global Health class, David Boyd brought the Ebola issue to life. He drew from his own travels to Sierra Leone just this past May to shed more light on the health system challenges that exist in a low-income country even before a disease outbreak hits. He is sharing with his students video footage and interviews he captured during his trip to better illustrate the country's poorly-equipped hospitals and lack of infrastructure. He says a disease like Ebola can have impacts that range from the familial to the macroecnomic.

In Kearsley Stewart’s Ethics of Disease Control class, she and her students are developing a website with Ebola resources, including interviews, local news sources and West African-based social media channels. Stewart’s students are able to play a key role in gathering this information and interviewing experts about various aspects of the outbreak and response.

Several DGHI faculty members are organizing a student debate on the ethics of using unapproved drugs as therapies or in clinical trials during the outbreak. They hope to organize a separate public event later this year.

Visit the DGHI Ebola Resource page for more information on the outbreak.