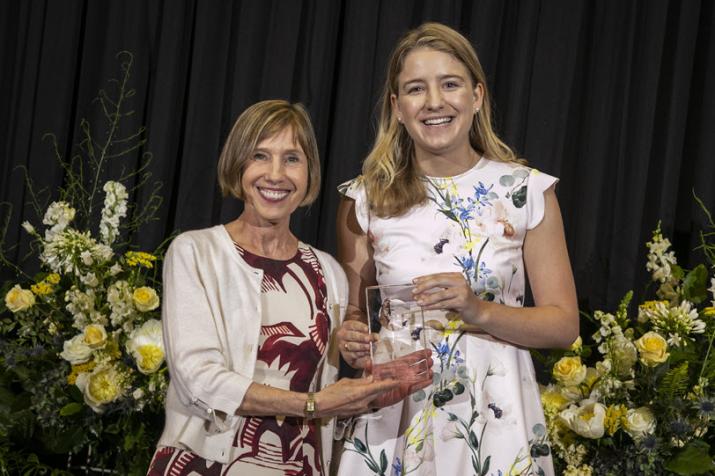 The Michael Merson Undergraduate Student Leadership Award in Global Health was established in 2018 to honor the legacy of the Duke Global Health Institute’s (DGHI’s) founding director, Michael Merson, who stepped down from his leadership role in 2017. The award recognizes a graduating global health undergraduate major student who has excelled in the classroom and in fieldwork and has demonstrated a strong commitment to global health and health equity through extracurricular activities and leadership.

While at Duke, Mastrangelo served as a teaching assistant for an undergraduate global health ethics course and a behavioral economics research assistant at the Robert J. Margolis, MD, Center for Health Policy. She also completed summer internships in New Orleans through DukeEngage at the New Orleans Children’s Advocacy Center and the Audrey Hepburn CARE Center.

Mastrangelo has published a peer-reviewed article based on her thesis, which explored child abuse prevention. Another article she co-authored is currently under review.

“Madison demonstrated an exceptional degree of intellectual engagement with her thesis,” wrote her thesis advisor, research professor Jennifer Lansford of the Duke Center for Child and Family Policy wrote. “She went well above and beyond the thesis requirements to produce a piece of scholarship that will be of genuine value to the scientific community and to stakeholders engaged in child protection efforts in global settings.”

Through the capstone, the culminating experience for the Duke global health major, students execute a team-based project. Consulting with their professor, experts in the field and community members, they apply what they learned in their coursework and fieldwork to design a feasible solution to a real-world global health problem. 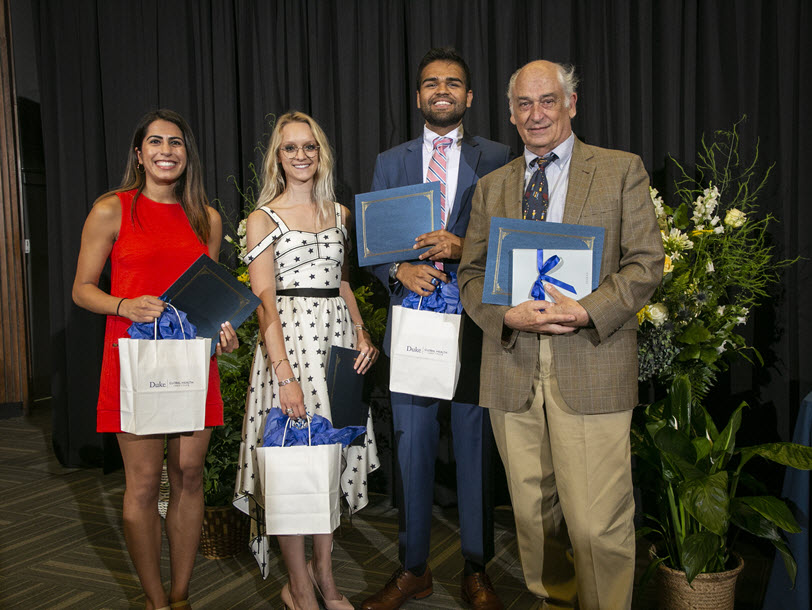 The team that won the Outstanding Capstone Award, with
their professor Dennis Clements. Photo by Chris Hildreth.

Charles Nunn, professor of evolutionary anthropology and global health, was voted this year’s outstanding undergraduate professor based on student nominations. Nunn joined the DGHI faculty in 2013.

Nunn is widely recognized by students for his dedication to mentoring, friendly disposition and passion for his work.

One student wrote, “Not only does Dr. Nunn involve students in his work, he welcomes their constructive criticism and input on future projects his lab is working on. Through being involved with his lab, I feel like I’ve gained an education far beyond what most undergraduate students receive. I’m held to higher expectations, but in return, I’m granted more trust and responsibility.”

Nunn’s engaging teaching approach has also impressed his students. One student wrote, “Dr. Nunn’s Human Health in an Evolutionary Perspective course was by far the most interesting class I have taken at Duke.” 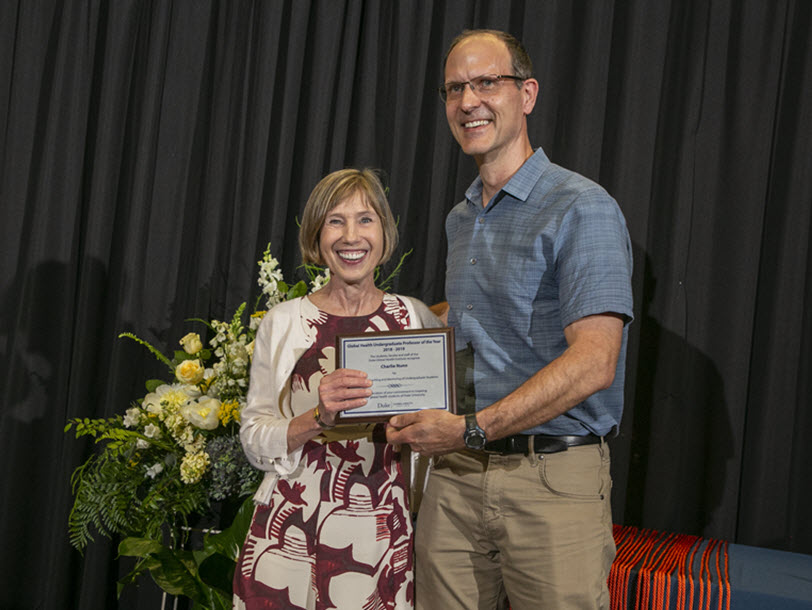 Nathan Thielman, professor of medicine and global health and associate director of the Master of Science in Global Health program, presented the undergraduate awards.

The Madeline Boccuzzi Outstanding Graduate Student Award in Global Health is presented annually to a student who excels in the classroom and the field and builds community at Duke. The award was named in remembrance of an exceptional global health master’s alumna who received the outstanding student award in 2013 and passed away in 2014 after a battle with cancer.

This year, Cyrus Elahi received the award. For his thesis, Elahi investigated whether a machine learning-based decision support tool could optimize care for traumatic brain injury patients. He was nominated for the award by two of his mentors, DGHI professors Anthony Fuller and João Ricardo Nickenig Vissoci.

Elahi took a break from medical school at Paul L. Foster School of Medicine in El Paso, Texas, to complete his global health master’s degree. While at Duke, he co-authored four research papers, two of which have been published, and he played a pivotal role in developing a new research line for Duke Global Neurosurgery and Neurology. He was also the lead developer in a provisional patent application. In addition to his academic and technical skills, Elahi has established himself as an extraordinary team player who easily develops productive working relationships with his Duke colleagues and peers as well as international partners.

“Cyrus stands out as the best student that we’ve ever had work with us in Duke Global Neurosurgery and Neurology,” wrote Fuller. “In every way he has been outstanding, from his personal leadership to his thesis project, and his genuine care for his community and fellow classmates. It has been a true pleasure having Cyrus in our group and his thesis project is one of the best we’ve ever had.”

“Mr. Elahi, by far, outperformed every single task that was given him,” wrote Vissoci. “I have had numerous mentees and none has functioned at such an impressive level of capacity on his first attempt at research.” 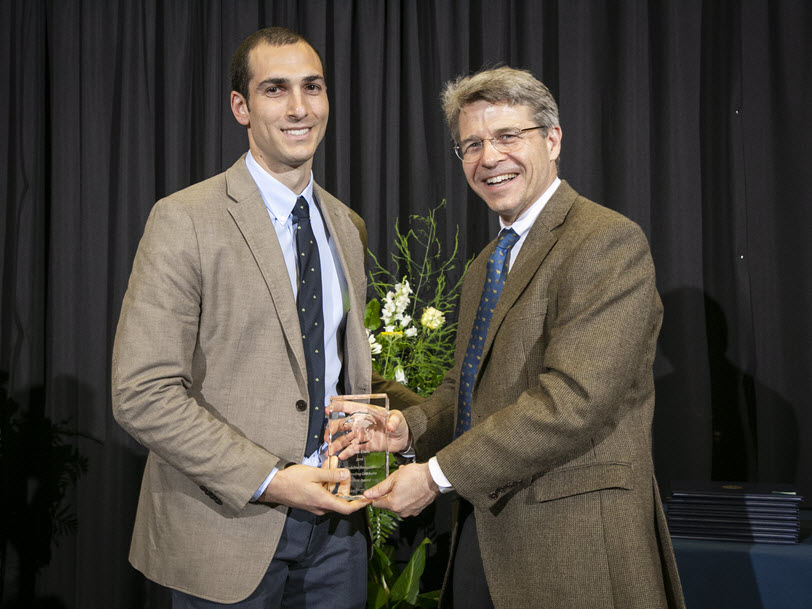 João Ricardo Nickenig Vissoci, assistant professor of emergency medicine and global health, was selected as this year’s outstanding graduate professor based on student nominations. Vissoci joined DGHI as a postdoctoral associate in 2016 and was promoted to a faculty position in 2017.

Common themes throughout Vissoci’s nominations were an appreciation for his skills and passion for mentoring, as well as a genuine interest in students’ goals and personal well-being.

One student commented on Vissoci’s “selfless dedication to prioritize student learning, ability to motivate students to exceed their own expectations, and mentoring principles that extend beyond the classroom.”

Another student expressed gratitude for Vissoci’s encouragement and confidence in her potential and his patience in seeing her grow as a confident and highly-skilled researcher. She wrote, “Besides sharing his love for data analysis, he has shown that he cares about his mentees through his constant support and helps them envision mastering skills they never would have sought on their own.” 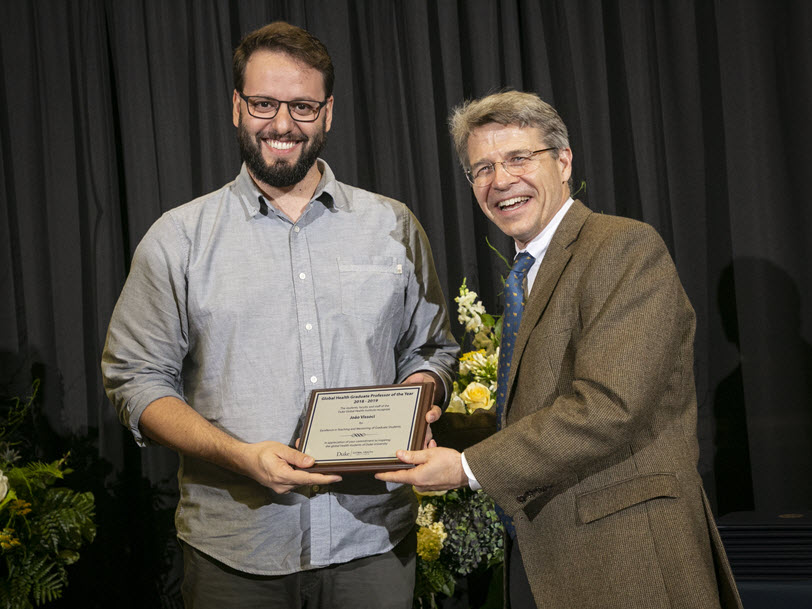