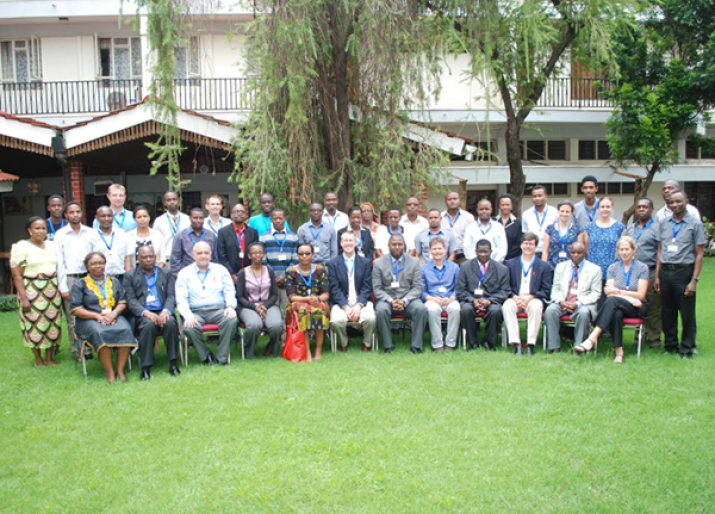 The INDITe project team at the project launch meeting in Moshi, Tanzania on April 21.

A study led by Duke Global Health Institute (DGHI) faculty member John Crump in 2007-2008 revealed that more than 60 percent of patients admitted with fever in northern Tanzania were diagnosed with malaria, but less than two percent of those patients actually had malaria. Rather, the patients’ illnesses included invasive bacterial, mycobacterial and fungal infections; bacterial zoonotic diseases such as leptospirosis and Q fever; and arboviral infections such as chikungunya and dengue.

But more than 60 percent of pediatric and more than 30 percent of adult febrile illnesses in northern Tanzania remained unexplained in the 2007-2008 study. Furthermore, the cause of an illness was more likely to be found among survivors than among those who died. According to Crump, our inability to identify and proactively manage specific infections contributes to patient fatalities.

In a new study, Crump, now an adjunct DGHI faculty member, is leading a research team that will attempt to better understand the causes of death among patients admitted to hospital with severe fever in northern Tanzania and identify interventions that could avert fatal outcomes among these patients.

The five-year project—dubbed “INvestigating Febrile Deaths In Tanzania” (INDITe)—aims to:

Crump and Maro are co-leading the project with Matthew Rubach, an assistant professor of medicine and global health who is based at KCMC. The team also includes DGHI faculty members Linfa Wang (also affiliated with the Duke-NUS Medical School in Singapore, another DGHI priority partner), Elizabeth Turner and Chris Woods, as well as former DGHI faculty member Jan Ostermann and researchers from other institutions. Each team member brings a unique expertise, including pathogen discovery, biostatistics, diagnostics, health systems, medical anthropology and infectious diseases pathology.

Combination of Autopsy Methods May Shed Light on Mortality Causes

Verbal autopsy—a patient history given by the patient’s caregivers and relatives after his or her death—has been the established means of attributing illnesses to causes for many years in low-resource settings. However, this approach is often inaccurate and unreliable.

To further understand the microbiologic causes of death in febrile illness patients, the INDITe team plans to conduct full autopsies on patients in the study when consent is granted, while remaining sensitive to the fact that post-mortem examination is socially sensitive in Tanzania, as in many areas of the world. With this in mind, the team will conduct formative research to understand community perceptions and knowledge of autopsy and implement measures to encourage acceptance of full autopsy within the study communities.

An alternative, less invasive option for families declining full autopsy will be minimally invasive tissue sampling (MITS). MITS, which is less invasive and quite accurate in determining infectious causes of death in developing countries, has also been shown to be more socially acceptable in these settings. Additionally, samples collected by MITS are less prone to contamination than those collected at full autopsy. The INDITe researchers will adapt high-resource MITS methods for low-resource areas by using clinical information and less complex and more widely available imaging techniques.

Social autopsy, a method of structured interviewing conducted with the patient’s relatives after death, has been used to identify non-biologic barriers to appropriate and timely healthcare in low-resource settings. Examples of these barriers include the cost of care, the logistical challenges of accessing care, or a caregiver or patient’s failure to recognize early signs of illness. INDITe investigators will adapt existing social autopsy tools—historically used only after death and primarily in the context of maternal and child health—for use with severe febrile illness patients during life to identify risk factors for fatal outcomes that could be alleviated or minimized with strategic interventions.

Mentoring Component Will Help Build Capacity beyond the Study

According to Crump, pathology services are among the most neglected components of the health system in many resource-limited settings, including Tanzania, with equipment shortages, inadequate processes, insufficient quality assurance measures and few trained pathologists. Another goal of INDITe is to strengthen pathology services in northern Tanzania.

“The HIV- Associated Malignancies Training and Research Program, led by [DGHI’s associate director of research] John Bartlett, has supported the specialist training of young pathologists to staff the department of pathology at KCMC,” said Rubach, who co-leads the KCMC-Duke collaboration, “so INDITe is well-timed to assist with the development of these key early career faculty members as they enter the workforce.”

KCMC pathologists and other scientists will be mentored by international experts on infectious diseases pathology, autopsy and pathogen discovery techniques. It is the researchers’ hope that INDITe well help establish a foundation in East Africa for investigating fatal febrile illness that can later be extended to a range of other conditions.

“We are delighted to be able to build on the foundation of research of severe febrile illness in northern Tanzania with this new project,” said Crump. “We’re fortunate to have assembled a strong team who can not only develop evidence that we hope will eventually lead to improved patient outcomes, but also support the development of critical pathology expertise at KCMC.”